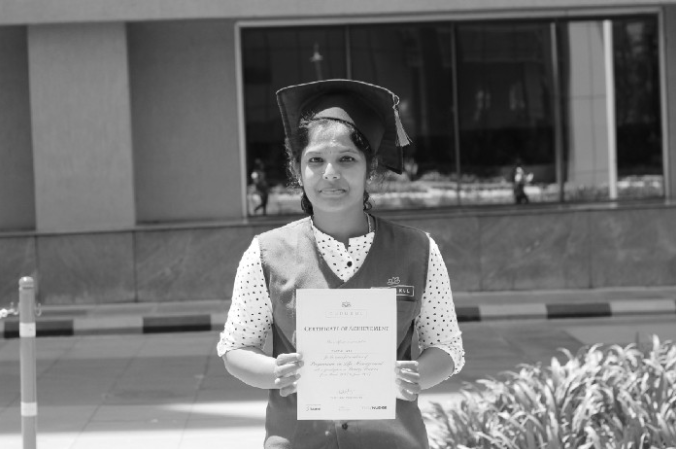 A Ray of Hope

Jyothi, a widowed mother of 2, fights illiteracy and poverty to come out as a winner

This story is of a young girl named Jyothi born and brought up in Karnataka, in an extremely poor family. Jyothi was only 13 when she was married off by her parents, in the hope that her husband would be able to better care for her than they ever did. So, at the age when she should have been going to school and playing with friends, Jyothi became a wife.

As fate would have it, her husband was a drunkard and beat her often. Life was a constant struggle for the young girl and within a year she gave birth to her first child. Couple of years later, she became a mother again as illness caught up with her husband. He passed away, leaving Jyothi — a 16 year old, illiterate who had never worked before, responsible for herself and her two children. Future was dark and bleak until she heard of a way out…

A Chance to Learn and Earn

Jyothi came to know about The/Nudge Gurukul’s 90-days residential program where many underprivileged youth who had dealt with similar circumstances like hers, were being given a chance to learn a skill, get a job and improve their life drastically even if they did not get a chance to go to school or finish their education.

She joined Sapient Gurukul where she became an inspiration for the strong resolve she displayed.

“I want my children to go to school. I don’t want them to suffer like me,” she would say.

What she loved was not just the fact that she was getting trained as a beautician but also for the first time in her life learning on how to save for the future. She soon opened a bank account and took a health insurance. The/Nudge has tied up with Biocon Foundation and Arogya Rakshana Yojne to let the students get a health insurance at very affordable premium rates.

Needless to say, Jyothi is now better prepared for all the challenges life throws at her. She know she can now take better care of her children and not be dependent on others. True to her name Jyothi is a shining example of grit and determination for all of us!

Are you inspired by Jyothi’s story? Your support can give more girls like Jyothi the life they truly deserve.
If you would like to help our students through your organisation, do get in touch with us at engage@thenudge.org